If the model of an organization’s software delivery is the code of that org, what follows is the documentation. It’s what new members can pick up on the first day, read in one sitting, and grok the mechanics of your organization. Just like the model, it’s subject to change as the organization changes, but like the model, it’s important to have it explicitly stated because it acts as a starting point for recursive self-improvement.

Your Own “Scrum Guide”

No two organizations of the same. No two organizations will have the same values, roles, workflow, or personalities. Why then do we try to apply generic documents to widely diverse groups in such a way that ignores or disregards their distinct characteristics? Creating your own agility handbook provides an opportunity to capture in natural language how your organization works, the number and function of the different roles, and how different entities relate and interact to produce value. It also acts as a critical change agent because as the organization changes those changes make their way back into the agility handbook which then gets repropagated throughout the organization.

A great leader demonstrating this value is GitLab. Read about their handbook-first approach to documentation here.

At the beginning of the 2020 global pandemic, the MyUPMC software group of UPMC faced a trifecta of sudden change:

To summarize, the entire operation needed to move faster, grow, and change the standard way of working at the same time and in a very short period of time. For all of the above reasons, significant changes needed to happen in processes and procedures. In the past, we got by having some meetings and conversations and going for walks one-on-one with folks to socialize ideas and settle on changes over time, but that whole dynamic was going to be different now. Suddenly the need for a canonical written source of process and procedures became evident. We needed a masthead, a comprehensive truth source that unpacked our shared software delivery process at the program level. The result of trying to address this need was the publication of a program-wide “Agility Handbook”.

We invested a lot of mental effort on what to include, what not to include, and how to communicate it in the most concise way possible. We labored strenuously for simplicity. Now I have to admit when we released this document, I was one proud papa. My agility cohort, Rick Pollick, and I felt really good about the final product, so I did what anyone would do. I shared it with some old Scrum Master friends of mine, possibly looking for a little kudos. One response stuck out to me more than the others, and it was this: “Why not just use the scrum guide?”

Every organization’s software delivery process is going to be inevitably unique. It’s important that that process is documented and codified in such a way that various teams independently and yet compatibly. 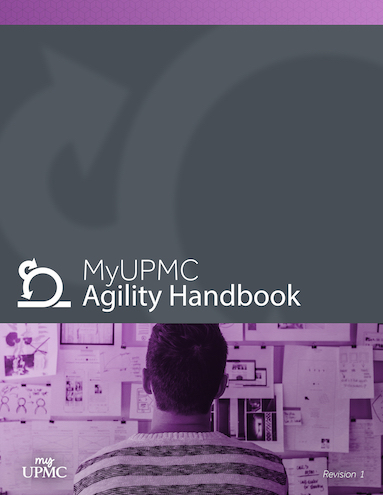 See our case studies page for a detailed breakdown of this work.

Reasons to write your own Agility Handbook

These exceptions are not outliers in fact, they are the vast majority of the norm as it’s been documented that most teams you said mixed methods approach [show chart].

There will be specific implementation details and pain points specific to your org’s application of scrum. Possible examples could be…

Now one possible alternative to doing this would be to have new folks read the Scrum Guide, Nexus, the Kanban guide for scrum teams, a few miscellaneous SAFe articles, and then some final material covering our specific implementation details that are either not covered by the previous works or contradicted by them.

Two final thoughts before moving into our final section: